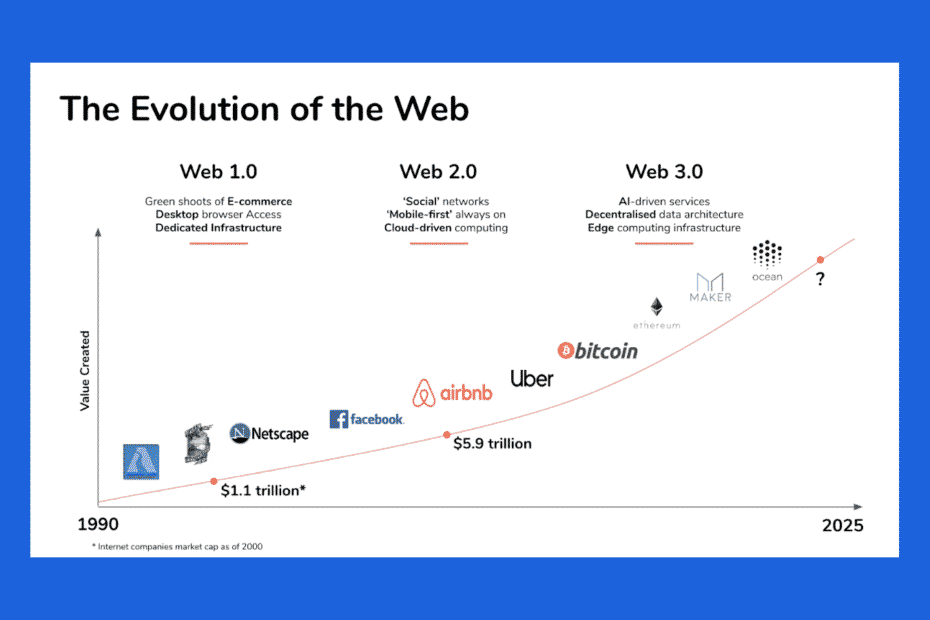 What technology benefits over 3 billion people every day for 80 percent of their waking hours? Web 2 (Web 2.0). Get ready, because Web3 (Web 3.0) is already here and it’s slowly taking over.

Since its conception, the Internet has evolved considerably. It has evolved from Internet Relay Chat (IRC) to modern social media to become an important aspect of human interactions.

Static information or user-generated content, such as forums and social media, are common features on today’s websites. While this permits information to be distributed to a large number of individuals, it may not meet the needs of a given user. Similar to the dynamic of real-world human communication, a website should be able to adjust the information it gives to each particular user.

In 1999, Tim Berners-Lee, the creator of the World Wide Web, articulated the concept of a Semantic Web:

I have a dream for the Web [in which computers] become capable of analyzing all the data on the Web – the content, links, and transactions between people and computers. A “Semantic Web,” which makes this possible, has yet to emerge, but when it does, the day-to-day mechanisms of trade, bureaucracy, and our daily lives will be handled by machines talking to machines.

Websites and applications will have access to an ocean of data in Web3 (Web 3.0), and they will be able to comprehend and apply that data in a way that is meaningful to the particular user.

A brief overview of the Internet’s development

Over the previous few decades, websites and web apps have evolved considerably. They’ve progressed from static websites to data-driven websites that users can edit and interact with.

What is now known as Web1 (Web 1.0) was the foundation of the original Internet. Darci DiNucci, an author and web designer, invented the word in 1999 to distinguish between Web1 and Web2. Websites were created in the early 1990s using static HTML pages that only allowed users to view information – there was no method for them to edit the material.

That all changed in the late 1990s when the Internet began to trend toward being more interactive. Users could interact with websites using databases, server-side processing, forms, and social media as part of Web2 (Web 2.0). This resulted in a shift from a static to a dynamic web. User-generated content and interoperability between different sites and applications have become more important as a result of Web2. Web2 was more about involvement than it was about observation. Most websites already made the shift to Web2 (Web 2.0) by the mid-2000s.

The growth of a more semantically intelligent web makes sense when looking at the history of the Internet. Users were first presented with data in a static format. The data could then be dynamically interacted with by users. Algorithms will now use all of that data to improve the user experience and make the Web more personalized and familiar. While not yet fully defined, Web3 (Web 3.0) could make use of peer-to-peer (P2P) technologies such as blockchain, open-source software, virtual reality, the Internet of Things (IoT), and others.

Many apps are now confined to running on a single operating system. Web3 (Web 3.0) could make apps more device-agnostic, allowing them to function on a wider range of hardware and software without incurring additional development expenditures.

Web3 (Web 3.0) aspires to free up and decentralize the Internet. Users must currently rely on network and cellular providers to monitor the information passing through their systems. With the introduction of distributed ledger technology, this may change in the near future, allowing consumers to reclaim control of their data.

What distinguishes Web3 (Web 3.0) from its predecessors?

The evolution of the Internet has been a long one, and it will undoubtedly continue to evolve in the future. Websites and applications have the ability to migrate to a web that gives a significantly better experience to an expanding number of users throughout the world, thanks to the tremendous growth of available data. While there is no specific definition for Web3 (Web 3.0) yet, it has already been triggered by technical advancements in other domains.

wpDiscuz
0
0
Have thoughts about this post? Let us know.x
()
x
| Reply